Film Nümayişi : The Day I Became a Woman 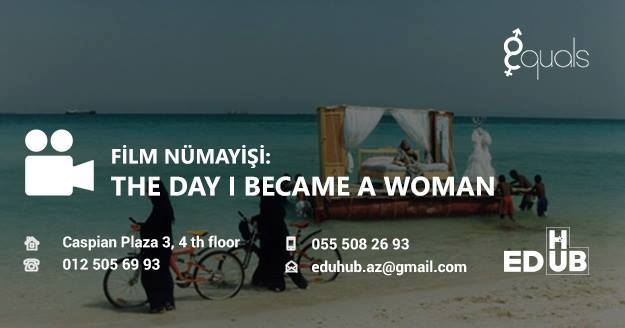 Film Nümayişi : The Day I Became a Woman

Cinema can be one of the best way of reflecting on the complicated questions of women’s rights, gender identity and negotiating life in patriarchal societies. The Equals initiative and EduActive are proud to co-host a screening and post-film discussion on Marzieh Meshkini’s film The Day I Became a Woman (2000).

In French feminist icon Simone de Beauvoir’s book ’The Second Sex’, she famously said that “one is not born, but rather becomes, a woman”. For so many women in Iran, Azerbaijan and so many countries around the world, their world changes the moment they “become a woman”. This is Iranian film maker Meshkini’s poetic and dreamlike response to de Beauvoir. The film tells the stories of 3 women at three different stages of “womanhood” - a young girl on the brink of womanhood, a wife furiously cycling to escape her husband, and an elderly woman coming to terms with the freedom she has been denied. These stories do not cast heroes or villains but portray women striving for a taste of freedom amid an Islamic society where societal restrictions confine them.

The film lasts only 75 minutes and will be shown with English subtitles. There will be a post-film discussion with invited guests from Equals, which will be in both English and Azerbaijani language. We hope you will join us. Male and female guests welcome!

Find out more about the Equals initiative here: https://www.facebook.com/groups/ADAEquals/