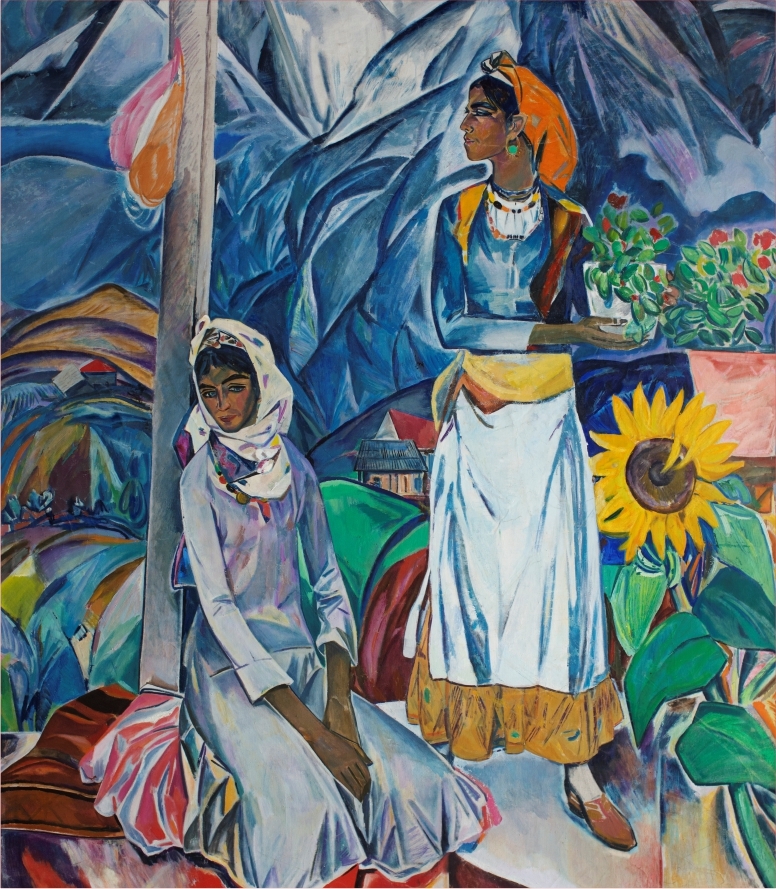 This exhibition brings together works by leading Azerbaijani painters who together defined a key period in Azeri Soviet art. After the death of Stalin in 1953, there was a new wave of freedom of expression across the Soviet Union and the artists were the first to benefit. Having been suddenly exposed to two pivotal shows of the time, the 1956 Picasso exhibition at the Pushkin Museum and the American National Exhibition in 1958, which for the first time showed works by Abstract Expressionists to the Soviet public, the new generation of Azeri artists heralded a new direction in painting. Away from the dogmatic prescriptions of Socialist Realism they developed their own distinct styles, unique in terms of their use of bright color, daring subject matter, bold brushstrokes, heavy impasto, and adoption of folklore elements.

While some artists, such as Tahir Salahov, pushed the technique of Realism, to add more expressive lines and emotive renderings, forming the famous Severe Style, others abandoned it altogether. Led by Mirjavad Mirjavadov they adopted a bold palette and a heavily layered technique both in form and content. Often adding basic, earthly materials to their works these artists, who together founded the Absheron School of Colourists, used a language often borrowed from Oriental symbolism and folk-tales to express their discontent with the status quo. Still others, such as Boyukagha Mirzazade and Maral Rahmanzade, perfected their technique of realistic depictions of the changing lifestyle around them portraying a new era of openness and progress.

How does one navigate such distinct styles and worldviews? What brings together such different artists as Sattar Bahlulzade and Toghrul Narimanbekov? This exhibition follows three popular themes largely preoccupying Azerbaijani painters in the period between the thaw of 1960s up until the perestroika at the end of 1980s. Labour, Leisure and Dreamssuggests an existence structured by the Soviet realities, yet deconstructed, repurposed and re-imagined through art. It proposes a new vantage point to view, analyse and appreciate the masters of the Golden Period in Azerbaijani painting of the 20th century. It is an invitation to momentarily enter the world that they inhabited and to envision the ideas and fantasies that moved them.

About the Museum of Azerbaijani Painting of the XX-XXI Centuries

Situated near YARAT Centre (near the National Flag Square) the Museum of XX-XXI Century Azerbaijani Painting was founded by the Heydar Aliyev Foundation. The Museum was inaugurated in June 2015 by the President of Azerbaijan, Ilham Aliyev and the First Lady Mehriban Aliyeva. It presents works by both prominent and lesser-known Azerbaijani painters from State Collections, such as the National Picture Gallery and the Museum of Modern Art. From 2018 onwards YARAT was commissioned to present a series of exhibitions with the works from the collection and to organize a public programme of events running throughout the year.

YARAT is an artist-founded, not-for-profit art organisation based in Baku, Azerbaijan, established by Aida Mahmudova in 2011. YARAT (which means create in Azerbaijani) is dedicated to contemporary art with a long-term commitment to creating a hub for artistic practice, research, thinking and education in the Caucasus, Central Asia and surrounding region.

Education has been at the heart of YARATs activities since its creation. With a dedicated public programme that includes courses, workshops, lectures, screenings, festivals, literature and theatre clubs and family weekends, YARAT aims to give access to broad audiences of all ages. The public programme invests proactively in building communities and nurturing a wider understanding of, and participation in, contemporary art.

Exhibition: Labour, Leisure And Dreams: 1960s-1980s Through The Eyes Of Azerbaijani Masters