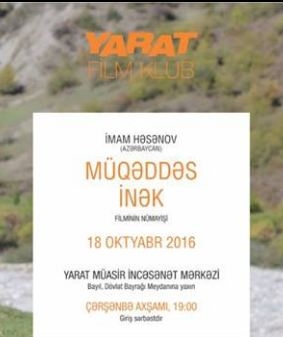 Holy cow” is a story of a man who tries to find the right balance between modernity and traditional lifestyle.

Taptiq is a farmer who lives with his family in Lagij village. Someone tells him about a unique cow that could help his family improve their financial well being. Taptiq is instantly afire with enthusiasm for this new breed of cow. He is planning to name her Madonna. But the idea is received with deep incredulity by the elderly of the village and the rest of the population. Even Taptig’s wife Vafa doesn’t want to take care of the strange creature.

Film uses a cow as a metaphor to speak about local mentality and moral codes that prevail in Azeribaijani countryside. It is an attempt to show how people in rural areas react and adapt to changes.

Apart from the screening in YARAT Film Club, screenings will be held in Sumgait, Mingechevir, Ganja, Guba, Lahij, Ivanovka and Lankaran.

The film will be shown in Azeri.